In a previous career as a practicing lawyer, I once spent 20 hours looking for a very specific precedent. After days of looking for a needle in a haystack I wasn’t sure existed, I actually found it and put it in my brief. A couple of months later, the judge kicked the case out of court and specifically stated it was because of the case I found. My boss was thrilled.

There is nothing unethical about turning over every rock – some attorneys would argue ethics require them to do so. But the fact that doing so is easy to justify gives attorneys cover to boost their billables and their revenue. Not making enough money? Go across the hall and get a senior partner’s perspective. Need more hours? Go back and re-research that issue one last time. Probably nobody will notice or care, and its entirely justifiable.

In fact, most in-house counsel know this happens because many of them did it themselves at their old firms. The mentality is understood and tolerated, to some extent, like optimizing your income taxes. That’s how it used to be, anyway, in the days when in-house counsel’s opinion was the only one that mattered. They rarely scrutinized invoices and, even when they did notice something unusual, might hesitate to say anything.

However, the advent of legal ops introduces a new cadre of financial watchdogs, and they don’t necessarily share the legal culture’s genteel disdain towards discussing money while making a lot of it. New research from Wolters Kluwer ELM Solutions suggests that, once they start looking, legal ops may uncover quite a bit of waste.

Everybody knows that many attorneys procrastinate on sending invoices until the end of the year when they start scrambling to hit revenue targets. But the new research shows it isn’t just invoicing that spikes – it’s the actual underlying work. The purple line in chart below (Chart 9) shows that about 30.7 percent more dollars are worked in November and December than are worked in January and February. This represents the full corporate law market (as a whole), not broken down by individual CLDs. When you look at the green and blue lines, which represent the mean and median at the level of the individual CLD, the differences are less dramatic, but still present.

But the real issue is exposed the second chart below, which is much more granular in nature. Here, we see consistent, dramatic spikes in November and December billings over a five-year period for a substantial number of corporate law departments, with 17 percent of CLDs having 50 percent more dollars billed in those two months than in the first two months of the year. Six percent of CLDs saw differences of 80 percent or more.

Again, this is not data from one unusual year, but data from 5 years “smoothed out” to make a composite representing a “typical” year. And you can bet that these spikes are not distributed evenly across all timekeepers at all firms. In terms of 80/20, you can expect most of the spike to be driven by particular timekeepers at particular firms. Those are folks to keep a very close eye on. 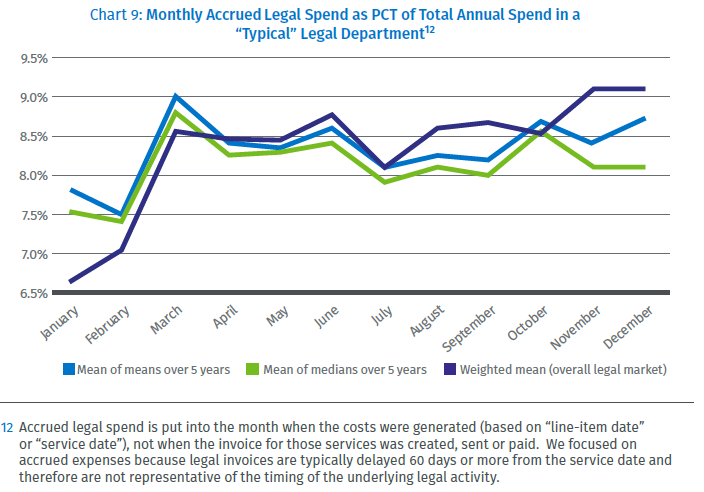 Law departments that see consistent, dramatic spikes in November and December should ask themselves whether those spikes are caused by firms’ desire to solve client problems or by their desire to solve their own. If you are not familiar with annual minimum billing requirements, you should read this article. It uncovers many of the challenges associated with hitting year-end targets, and it is not hard to imagine a scenario in which attorneys start to overwork cases in the final months of the year. The risk of this happening is probably worse in practices that aren’t doing very well – attorneys who are flush with work are going to hit their minimum billables regardless. 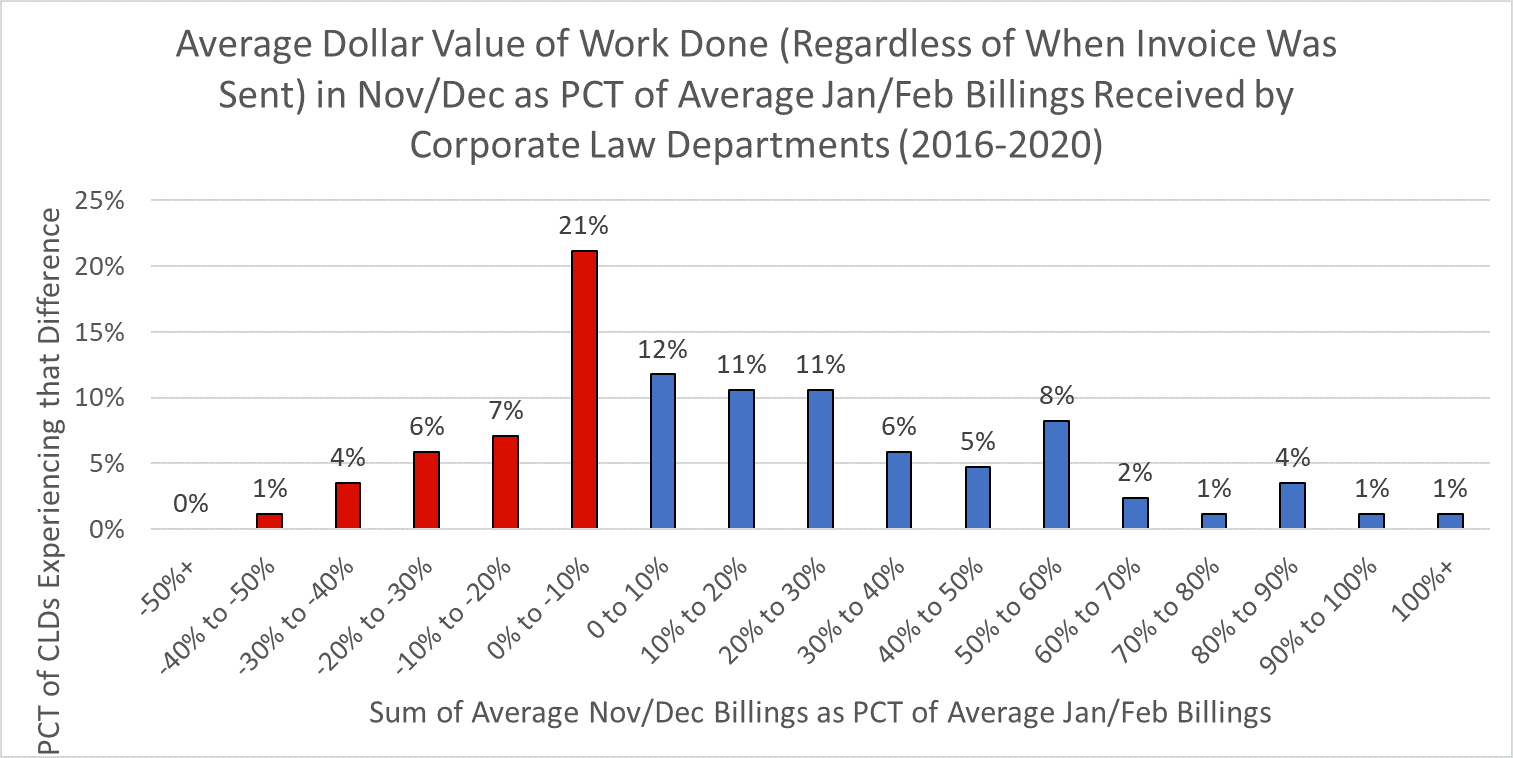 To be fair, there are plenty of legitimate motivations for doing a bunch of work at the end of the year. Clients have deals and other work they want to conclude on a certain timeline. They may also find themselves going into November still having a lot of budget to erode, and therefore move some work originally intended for next year into the current one so they start next year ahead of the game.

But in my opinion, EOY spikes are guilty until proven innocent, meaning that if in-house counsel can’t explain the spike then there needs to be a conversation with the firm. Law firms understand some clients will pay anything while others are vigilant and will reduce and eventually terminate relationships they deem exploitative. It is in the best interests of every CLD to make it exceedingly clear they do not fall into the first camp.

In addition to gaining a reputation as fiscal hawks, CLDs that are concerned about “excessive EOY thoroughness” should understand that AFAs and/or budgets that actually get enforced can be good ways to discourage overwork. Law firms that need to play games to hit their targets will simply turn their attention to the low-hanging fruit that doesn’t have the discipline to guard against this behavior. Let that be somebody other than you.